The Science Fictionary: a Glossary of SF 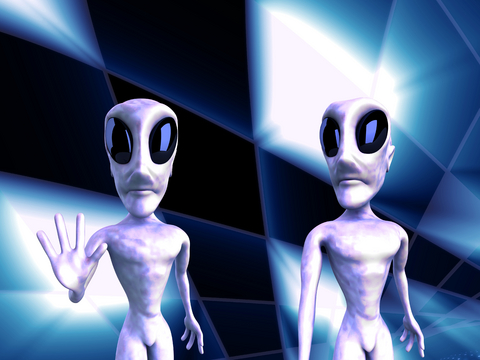 Antimatter's existence was first proposed in 1928 by physicist Paul Dirac. The phenomenon soon captured the imagination of science fiction writers. The first science fiction story to deal with antimatter was probably "Minus Planet" by John D. Clark, published in the April 1937 issue of Astounding Stories. In 1955, antiprotons and antineutrons were observed in particle accelerators. Antimatter is a key element in the warp propulsion systems of star ships in Star Trek.

Big Three, The. The "Big Three" are arguably the most popular science fiction authors of the 1950s, 1960s, and 1970s -- Isaac Asimov, Arthur C. Clarke, and Robert Heinlein. Robert Heinlein was best known as the author of the utopian cult novel Stranger in a Strange Land. Arthur C. Clarke is the author of 2001: A Space Odyssey. A 1945 paper Clark wrote proposing a system of communications satellites in geostationary orbit earned him credit as "inventor of the communications satellite." Isaac Asimov, one of the most prolific authors of all time, wrote almost 500 books including the science fiction classic trilogy, the Foundation series.

Bionics. Dorland's Illustrated Medical Dictionary defines bionics as "the science concerned with study of the functions, characteristics, and phenomena found in the living world and application of the knowledge gained to new devices and techniques in the world of mechanics." In science fiction, bionics refers to high-tech artificial limbs, organs, and other body parts used to replace injured or damaged tissue, bone, and muscle in humans. Martin Caidin wrote of a man with bionic limbs in his novel Cyborg. The novel was turned into the TV series, The Six Million Dollar Man, starring Lee Majors as Steve Austin, a bionic man with superior strength, speed, vision, and endurance.

Black hole. A black hole is an extremely dense star. The star has collapsed, increasing its density to the point where nothing, not even light, can move fast enough to escape its tremendous gravitational pull. Since nothing can escape, the star is like a "bottomless pit" or hole in space, sucking in everything that comes near. It is black because no light shines from it. Hence the name "black hole." The first black hole to be detected, Cygnus X-1, was found by astronomers in 1971. Since then, many other black holes have been observed.

Clone. Cloning is the process of making a genetic twin or duplicate of a living organism. The nucleus from one of the organismšs cells is taken and implanted in an egg cell (from a different organism) whose nucleus has been removed. The combined cell is stimulated so it begins to divide, and is then implanted in an organic or artificial womb. The resulting organism would be an identical twin -- biologically -- to the nucleus donor, although it would of course be younger. One of the first science fiction stories to feature cloning is Fritz Lieber's "Yesterday House," published in the August 1952 issue of Galaxy Science Fiction magazine. The first clone of a vertebrate was produced in 1967, when a British biologist successfully cloned a South African clawed frog. In 1997, scientists successfully cloned mammals including sheep and monkeys.

Cyberpunk. Cyberpunk is a subcategory of science fiction. It takes place in a world where computers, drugs, and high-tech electronics are the dominant forces in people's lives. William Gibson is credited as the originator of the cyberpunk school of science fiction.

Cyborg. A cyborg is a being who is a mixture of organic and cybernetic (bionic) parts. To qualify as a cyborg, you must be at least half machine; otherwise, youšre just a person with some artificial parts. Examples of cyborgs include the Borg of Star Trek: The Next Generation and Officer Murphy, the robotic police officer in Robocop.

Force, The. The Force is a strange, mysterious energy within the universe. It can be tapped by individual beings and used for good or evil. The Jedi Knights, in Star Wars, used the Force to combat the evil of the Empire, which used it for conquest and plunder. The expression "May the force be with you" became a part of American culture when Star Wars was at its peak of popularity.

Grok. To grok means to understand something or someone in a deep, meaningful, and positive way. The term was invented by Robert Heinlein in his novel Stranger in a Strange Land. Some Star Trek fans who were fond of Leonard Nimoy's character coined the phrase "I grok Spock."

Jaunt. The ability to teleport -- to travel from point A to point B instantaneously. Alfred Bester described jaunting as teleporting without the aid of a transporter or other mechanical device; humans could self-teleport to any destination that they could mentally picture and was within their jaunting range; different people had different ranges.

In Stephen King's short story, "The Jaunt," people are rendered unconscious using gas before being jaunted by machine, because time perception is different during jaunting than in the physical world: While the jaunt takes a nanosecond, it seems like eons to the human mind, driving the jaunted person mad unless he or she is asleep. In King's story, a boy holds his breath so he can stay awake and experience the jaunt. At the destination, his father awakens to see the boy screaming, insane, hair turned white, ranting and raving while ripping out his eyes with his hands. "Longer than you think, Dad," the boy cackles insanely, "longer than you think!"

Mentat. A mentat is a human being capable of performing mental tasks with the accuracy and speed of a computer. Frank Herbert introduced the mentat in his novel, Dune. Mentats were employed as "human computers" by the ruling class of the planet Arakis.

Morlock. In the future, human beings split into two races. Above ground live normal humans, docile and peaceful. Below ground live the Morlocks. They are furry, intelligent, capable of seeing in almost total darkness, and have mastery of machinery. The Morlocks control the normal humans, providing for their needs, raising them as a food supply. If a normal human is brought underground by a Morlock, it's usually to cook him for a meal. Morlocks first appeared in The Time Machine by H.G. Wells. Later the X-Men comic books and TV series featured a band of outcast mutants who called themselves the Morlocks and lived in the tunnels under New York City's subway system.

Neutron star. In 1916, astronomers first proposed the theory that gravity would cause older stars to collapse into small, dense balls of matter. This turned out to be true for stars only of a certain size -- about one and a half to three times the size of our sun. In the later stages of their development, these stars explode as supernovas, then collapse under their own gravitational pull. The protons and electrons of the star's atoms are crushed together, forming neutrons. The neutrons are then compressed into a ball of superdense matter consisting of nothing but neutrons -- hence the term "neutron star." The first science fiction story to feature a neutron star is Larry Niven's "Neutron Star," published in Worlds of If, October, 1966.

Psychohistory. A branch of history in which events can be analyzed and explained by the way human psychology dictates our decisions and actions. The father of this discipline is Hari Seldon, a central character in Isaac Asimov's Foundation series. Years after Foundation was published, psychohistory became a legitimate branch of psychology.

Positronic brain. A robot brain where the data being processed and analyzed is carried by a flow of positrons through different channels within a metal brain structure. The Three Laws of Robotics are programmed into every positronic brain. Positronic brains were introduced by Isaac Asimov in his robot stories and novels.

Spin dizzy. In the future, our descendants leave earth to travel through space, not in rocket ships or space stations, but in the actual cities of Earth -- New York, Los Angeles, Boston, San Francisco. Spin dizzies are giant anti-gravity propulsion devices that generate a force field around a city and turn it into a self-contained, self-propelled space ship. The spin dizzy was invented by James Blish in his novel Cities in Flight.

Trump. A trump is a special illustrated playing card with magical properties. Only members of the royal family of Amber, and certain other individuals with magic powers, can use them. Trumps with a picture of a person allow the user to mentally communicate with that person by touching the card. The user can also instantaneously transport himself to the location of the person pictured on the trump, and the reverse is also possible. Trumps were used frequently by Prince Corey in Roger Zelazny's novel, Nine Princes in Amber.