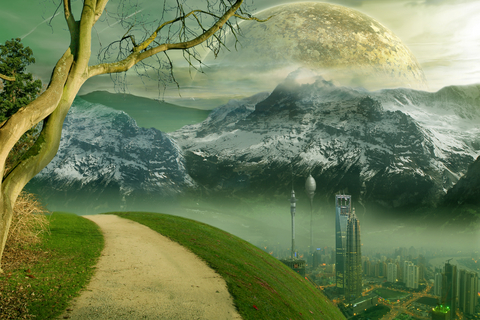 "All good ideas have been thought of by somebody before they are realized."
--Arthur C. Clarke*
* Tales from the White Hart (1957)

"Science is a project in a constant state of revision. Theories are tweaked, probabilities adjusted, limits pushed, elements added, maps drawn. And every once in a while, a whole chapter gets a rewrite."
--Scientific American*
* 3/03, p. 10.

"It is less than five hundred years since an entire half of the world was discovered. It is less than two hundred years since the discovery of the last continent. The sciences of chemistry and physics go back scarcely one century. The science of aviation goes back forty years. The science of atomics is being born. And yet we think we know a lot. We know little or nothing. Some of the most startling things are unknown to us. When they are discovered, they may shock us to the bone."
--Donald A. Wollheim*
* "Mimic," 1942

"Science fiction writers have been making predictions for generation now, and because the accuracy of the forecast is only as good as the quality of the information being used, the predictions of science fiction writers have generally been better than those of anyone else's - including the complex computerized 'world models' of the scientists who call themselves futurists."
--Ben Bova*
* Berry, Adrian, The Book of Scientific Anecdotes (Prometheus Books, 1993), p. 178.

"All great discoveries had, at first, a devastating effect on the state of the world and on its image in our minds. They shattered it and introduced new conditions. They forced the world to move forward. But this was possible only because the discoverers were not afraid of the consequences of their discoveries, no matter how terrifying these were to all those who wanted to preserve the world as it was, and hang a big notice on it, saying: Please do not disturb."
--Edward Teller*
* In the Matter of J. Robert Oppenheimer by Heinar Kipphardt (Hill and Wang, 1968)

"Scientists do not, in the ordinary course of their investigations, consider how their quest for knowledge will affect the future and human existence. Science fiction was the literary response to the fact of manmade change and the possibilities of catastrophic or fundamental changes in the Earth, the Solar System, the galaxy, or the universe. Mostly it came to concern itself with the effects of scientific and technological changes on people in the real world, and thus began to act not so much as the champion or critic of science but as the analyst of scientific possibilities and their human consequences."
--James Gunn*
* Welcoming Remarks at the 2004 Campbell Conference.

"We're living in a science fiction world. The headlines of our newspapers trumpet cloning experiments, the teleportation of atoms, computers controlled by brainwaves, robots that walk and play musical instruments, private planes that carry passengers to the edge of space, space probes that rendezvous with asteroids, and implantable devices that restore hearing to the deaf. When miracles like these are the baseline, how can fantasy measure up?"
--Eric S. Rabkin*
* BusinessWeek, 10/11/04, p. 206.