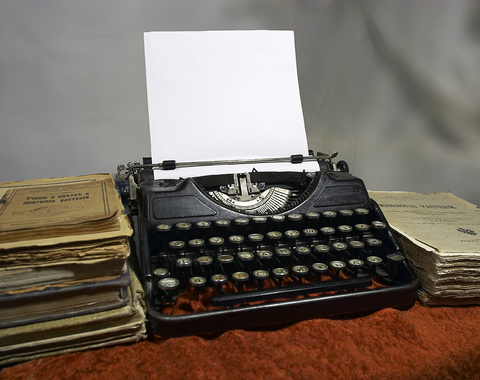 I have been an avid reader of SF for 41 years. Here in no particular order are 10 of my all-time favorite science fiction writers. If you are a science fiction fan, I can guarantee you hours of great reading by picking up the works of these authors, especially the books listed below:

Harlan Ellison (HE) hates the term "science fiction" because his writing focuses on people, not science - and also because he writes in many genres and in fact would tell you his writing transcends genres. He is fond of quoting Faulkner to point out that "the only thing worth writing about is the human heart in conflict with itself."

You can read my interview with Harlan Ellison in Writer's Digest magazine. I have published a couple of interviews with HE, and have also bought reprint writes to his materials for several of my projects including my e-book on how to write and sell short stories.

HE is best known as a short story writer and secondarily as an essayist, having published relatively few full-length novels, SF or otherwise, under his own name. He has also written for movies and (more prolifically) for television, where his credits include the Star Trek Episode "The City on the Edge of Forever," rated as one of the best 100 TV show episodes ever by TV Guide.

The truly great SF stories he has written are too numerous to mention here. "Repent, Harlequin Said the Tick Tock Man" is one of the most reprinted stories in the English language, though my personal favorite is "I Have No Mouth and I Must Screen." HE stories are characterized by eloquent, rich language; strong emotion; a social conscience; compelling characters; and engaging plots.

The quickest way to immerse yourself in HE and his writings is to read The Essential Ellison, a massive trade paperback; watch Dreams with Sharp Teeth, a DVD documentary on the writer; and visit the HE web site at: http://harlanellison.com/home.htm 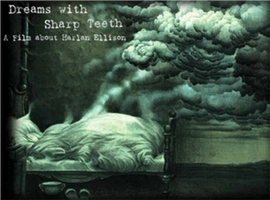 I met Roger Zelazny and had a long interview with him at a science fiction convention in 1979. He was relaxed, smart, engaging, and gracious.

Zelazny's is known as SF's prose-poet. His novels can wax poetic. Some include poetry. And he has published several books of poems. Critics say the quality of Roger Zelazny's novels is uneven, and though I have enjoyed all of them, I agree somewhat, in that they range from merely good to great. Nothing he writes is boring or poor in quality.

I do agree that his best novels are two of his earliest: Lord of Light and Creatures of Light and Darkness. He is also at the top of his game in such books as The Dream Master, Damnation Alley (made into a movie of the same name), and my personal favorite, Jack of Shadows. I enjoyed but was less enthralled with some of the later novels such as Today We Choose Faces and Eye of Cat.

He is best known for his Amber series of books, the first of which, Nine Princes in Amber, remains the best of the series. Find out more about Roger Zelazny online at http://www.roger-zelazny.com/

If Roger Zelazny is SF's great prose stylist, Isaac Asimov is the opposite, a writer who prides himself on his plain, unadorned, simple, and clear writing.

Asimov's claims to fame are twofold. First, he is SF's most prolific writer, having published more than 475 books of science fiction, science fact, and other nonfiction topics, most notably popular history. Second, he is known for his Three Laws of Robotics, fictional rules that govern the behavior of robots in his stories.

Among my favorite Isaac Asimov novels are The Gods Themselves, The Caves of Steel, and the Foundation trilogy. He also wrote many robot stories collected in books including I, Robot, which is the basis for the movie starring Will Smith. Harlan Ellison (see #1) wrote a screenplay for I, Robot, but it was not used.

Asimov edited many anthologies of SF stories to which he wrote witty and entertaining introductions. He is also a great SF short story writer. His story The Bicentennial Man was made into an entertaining movie with Robin Williams, though Asimov's original story is more moving.

While "Nightfall" is considered the greatest Asimov story, I much prefer "The Last Question," about a computer that ponders a way to stop the end of the universe, and "The Feeling of Power," describing a future in which the availability of calculators has caused human beings to forget how to do simple arithmetic.

You can find out more about Isaac Asimov online here: http://www.asimovonline.com/asimov_home_page.html 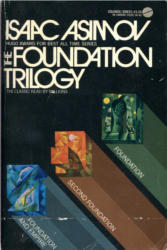 With around half a thousand books published, Isaac Asimov is widely considered the most prolific SF author. But Robert Silverberg (and also Arthur C. Clarke; see #7 below) are not far behind.

Like Asimov, Silverberg is a prolific author of science fiction, science fact, and other categories of both fiction and nonfiction. The Book of Skulls may be his most-praised novel, but my favorite is Dying Inside, about a telepath who is losing his powers.

Whenever I am in a used bookstore with a science fiction section, I look for old Silverberg paperbacks. He is so prolific that the book I find is usually one I have never heard of - one of his minor works. Yet I always buy it, because Silverberg never fails to entertain and stimulate. One (I forget the title) took place in a future where citizens lived their entire lives in gigantic skyscrapers and never went outside.

Although Asimov is best known for the number of books he has written, I once heard someone say, "Silverberg has written more books." Looking at his web site, I see 280 novels, 95 nonfiction books, plus dozens of short story collections and anthologies. If he hasn't overtaken Asimov, he's darn close.

JG Ballard specialized in bleak post-apocalyptic visions of futures in which the world is slowly running down and falling apart. In his fiction, lack of rain caused by a chemical "skin" covering the ocean (caused by ocean dumping of chemical waste) triggers worldwide drought.

In another Ballard story, animals evolve to resist coming nuclear attack, incorporating lead into their shells to shield them from the fallout. One protagonist finds himself approaching a sleep cycle of 24 hours a day, as a silent gene in humans has activated to shut down the species. In another, a man desperately tries to save the life of the last fish on Earth. His characters are often found tramping through semi-desolate and inhospitable wastelands, trying to survive as the end of everything approaches. Spooky.

Here's a web site with a lot of links to all things Ballard: http://www.jgballard.com/

Sturgeon writes riveting SF short stories and novels. My personal favorite, The Dreaming Jewels, was about a strange kid. The kid turns out not to be human, but was created by two aliens that look like crystals. I remember he ate ants throughout the novel. It turned out the aliens built a human imperfectly, and he ate the ants to make up for a formic acid deficiency. Lots of reviewers point to Sturgeon's preoccupation with alien and weird sex and sexual relationships, but it doesn't carry through all of his work. More Than Human has been cited as his best SF novel.

Ted Sturgeon on the web: http://www.fantasticfiction.co.uk/s/theodore-sturgeon/ 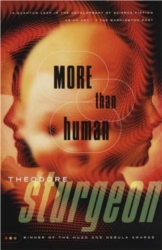 Along with Isaac Asimov (#2) and Robert Heinlein (#8), Clarke is one of the senior statesmen and seminal influences on SF. Like Asimov and Silverberg, he is a prolific author of both fiction and nonfiction books.

Arthur Clarke is famous for a few different things: (1) He is credited with coming up with the idea of communications satellites in a technical article he wrote in 1845. (2) He wrote 2001: a Space Odyssey for Stanley Kubrick. (3) He is an expert scuba diver and has written many books on the subject. (4) He is also an avid amateur astronomer, (5) He lives in Sri Lanka.

My favorite Clarke novels are Childhood's End and Rendezvous with Rama. Clarke is also great at short fiction, and Tales of the White Hart is my favorite of his story collections. The stories are interlinked with the charming idea of a club where the members tell the tales, a device used by Stephen King in "Breathing Method."

Here where to find Clarke on the web: http://www.arthurcclarke.net/ 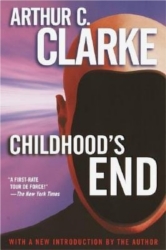 When I got hooked on SF at around age 12, two of the books that mesmerized me were Heinlein's novels Stranger in a Strange Land and The Moon is a Harsh Mistress. I recall reading and liking, much later, The Green Hills of Earth.

For some reason, I never read as much Heinlein as the other writers on this list, nor did I seek out his books with the same eagerness. But everything I have read by him, I loved. One of my favorite quotes about writing comes from Robert Heinlein: "If you are not entertaining the reader, all you are doing is making paper dirty on one side." 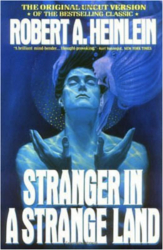 Alfred Bester is an odd choice here, because he didn't produce all that much SF. But he is the author of two of the greatest SF novels ever written: The Stars My Destination and The Demolished Man. And for that he makes my list, though his few other novels are not as satisfying. If it had been only one of these novels, I probably would have left him off the list, just as I did Walter Miller (A Canticle for Leibowitz). 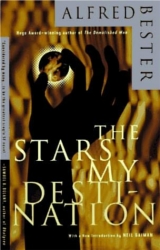 I shook hands once with Ray Bradbury when he was a speaker at a marketing conference I attended many years ago. He gave an excellent speech, and is a wonderful writer. His best-known novels are probably The Martian Chronicles and Fahrenheit 451. Among his story collections I particularly like The October Country and The Illustrated Man.

During the talk (or maybe after), Ray Bradbury mentioned that he thought of Fahrenheit 451 as his "dime" novel. Not because it was published in pulp magazines that cost a dime in those days. But because he wrote it in the basement of a large library near his home (Bradbury doesn't drive) on a coin-operated rented typewriter, which he had to keep feeding dimes to continue to write on. He said the first draft of Fahrenheit 451, a very short novel, cost him $9.80 to write on that machine. 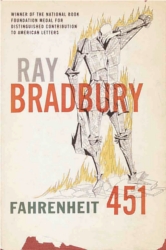