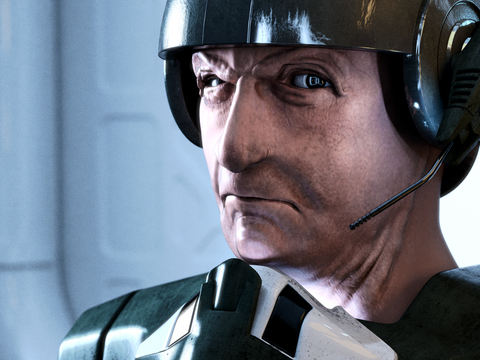 A sad, wrenching tale about the story of the last Neanderthal as a metaphor for obsolescence. His species is heading toward extinction, his mate is dead, and he is all alone, barely surviving. Eventually the leader of a tribe of early humans takes pity on him. Instead of killing him, the humans take care of him, keeping him as a sort of pet, though out of kindness more than anything else.

An intelligent, self-aware super-computer has destroyed the world. It keeps and tortures the last 6 humans, whom it hates, alive for its own amusement. The hero foils the computer by managing to kill the computer's human "toys" - except him. The computer takes revenge by transforming him into a shapeless inhuman blob.

Over a period of thousands of years, various human operators ask an increasingly evolving line of computers for the solution to prevent the death of the universe from entropy. Long after the universe has gone cold and mankind has died out, the computer still exists for the sake of processing and answering this query. Eventually it does, and figures out how to create a new universe, which it does by announcing "Let there be light." 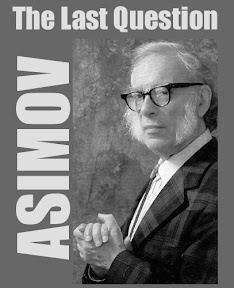 A team of programmers and scientists are using a super-computer to figure out all the names by which God can be referred to. One wonders what our purpose in the universe is. He suspects it may be to figure out the 9 billion names of God, and worries what will become of us when the job is complete. The computer finishes, the names are found, and overhead, the stars in the sky begin to go dark.

In the future, scientists use dinosaur DNA and genetic engineering to create miniature living intelligent dinosaurs that are sold as children's toys. The little dinosaurs are bright, sweet, and docile, but sold as toys, they have no rights. Often children abuse them and as they get older abandon them, as happens to all children's toys. But these toys are living sensitive creatures that experience emotion and feel pain. The protagonist runs a home where abandoned and abused dinosaur toys are taken care of and can live out their lives in peace.

A widower buys a robot to serve as caretaker for his children. Two of the children come to love the sweet and affectionate robotic nanny, but one daughter remains aloof and resentful. One day her brother runs into the street and is saved from being hit by car by the robotic nanny, who is unharmed. The daughter reveals that she was afraid to love the new "mother" because she too would die someday like their natural mother. When the robotic mother explains that she cannot die and will always be with them, the daughter comes to love her too. As adults, the siblings put robotic mother into store, where she will await them again when they are old and feeble, and need her to take care of them once more.

A baby boy named Anthony is born with intelligence and the incredible mutant power to manipulate all matter and reality. With his mental powers, he isolates his small town from the rest of the world (or perhaps has destroyed the rest of the world; the inhabitants do not know), and he rules with an iron hand. Everyone lives in fear of Anthony, who is both an all-powerful mutant and a spoiled cruel child. One night an adult encourages mutiny and is killed by Anthony, and the rest realize they are doomed to this fate forever.

A hero astronaut whose body is nearly destroyed in space is given a new robotic body, turning him into a powerful cyborg and a freak called The Bork. He goes to an isolated euthanasia planet to die, but upon arrival, finds a kind of peace, and decides to keep living. The keepers of the place, however, want him to stick with the original end-of-life arrangement and make frequent attempts to kill him. However, the Bork's unique cyborg biology makes him all but invulnerable to their weapons. The Bork meets and develops feelings for a beautiful young woman who is also resisting the death that is planned for her on the planet.

A child runs errands for his lazy, mean, unemployed father, who sits in the house and drinks beer all day. The errands include drinking beer. His father drinks some beer that has gone bad, and it mutates him into a shapeless gray blob. The dad still sits in a chair and drinks beer all day, but now he begins to eat stray cats and has clearly evolved into a monster. 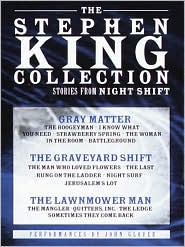 Through an experimental procedure, a retarded man becomes a genius, smart enough that he contributes to the research and study of the process that gave him his intelligence. Then to his horror, his calculations show that the procedure is temporary, and he slowly begins to lose his intelligence and revert to retardation.

The reclusive Dr. Munoz lives in an apartment chilled to extremely cold temperatures by an apparatus of his own invention (the story was written decades before the invention of refrigerators and air conditioning). It turns out he "died" years ago - his major organs failed - but he has found a way to keep living despite the death of his organs. The extreme cold is needed to preserve the no-longer-functioning organs and tissues. When his home-made air chilling machine breaks down, his body rapidly deteriorates and he dies once again - this time, for good.

Simon Kress, a wealthy man who collects exotic animals, buys and sets up a huge tank full of sandkings - small creatures with exo-skeletons that resemble insects. Different colored tribes of sandkings live in each of the four corners of the tank, go to war with each other, and worship Kress as their supreme being. But when he mistreats them, the sandkings escape, and Kress discovers that they molt and grow - and that they want revenge against him for his cruelty. Hollis is a member of the crew of a space ship. The rocket blows up, scattering the astronauts, who are protected from outer space by their space suits, in all directions. Realizing they are doomed, they have revealing conversations with one another over their communicators as they fall into space. Hollis, heading toward Earth, realizes he will burn like a meteor when he re-enters the atmosphere. As he does, a little boy sees him as a bright speck in the sky, which he thinks is a falling star. Harry Herman is an alien from outer space. He looks human, although each hand has two thumbs and one finger. His race has sent him to Earth with a gift for mankind: a vaccine that will eliminate all disease. He chooses an old country doctor, Doc Kelly, to present the discovery, and once he does, plans are made to distribute the vaccine across the globe. Unfortunately, Doc Kelly discovers that the aliens classify man's intelligence - which causes him to build weapons and wage war - as a disease. And taking the vaccine lowers human intelligence. Is it to stop us from destroying our own planet, or soften us up before an alien invasion?

Entropy has won: the human species, the planet Earth, even the entire universe are running down, falling apart, and swiftly approaching their end. Humanity is devolving, RNA is wearing out, and in response the human sleep interval is rapidly lengthening to a point where we sleep more hours per day than we are awake.

The heroes, a team of scientists, are irradiating laboratory animals to switch on their "silent genes." The goal: trigger biological changes to allow the animals, and possibly mankind, to adapt to future environmental conditions. The results are weird mutations, such as a spider that spins webs out of nervous tissue instead of silk and whose eyes are blind to sunlight and can only see gamma radiation. But the experiments all fail; for example, a plant that develops squid-like tentacles for locomotion bursts into a pool of mucilage.

Mankind, the world, and the universe are ending, and there is nothing the brightest scientists can do about it. But the protagonist, Kaldren, will have to face the end of everything alone: while his colleagues sleep more and more, he has undergone a surgical procedure that prevents him from ever sleeping again, despite his failing RNA, so only he will remain awake and functional to witness our final days. Ballard has written many great entropy-themed stories (in particular "The Deep End"), of which "The Voices of Time" is perhaps his finest.

An astronaut finds a stowaway on his rocket. Though she is there illegally, he is compassionate and will let her stay, until he makes a chilling discovery: her extra weight will use up the rocket's fuel before reaching its destination, stranding them both in outer space. He ultimately makes the logical rather than the emotional decision, jettisoning her into outer space. 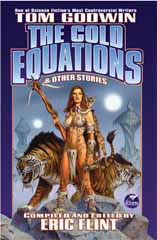 James Kidder is a brilliant scientist who lives alone in an island laboratory. Kidder creates a race of miniature artificial beings which he calls the Neoteric. They evolve rapidly beyond man's intelligence and create inventions even more brilliant than Kidder's. But because he controls their environment and punishes them when they do not obey him, they worship Kidder as their god. When Kidder's island is attacked, he commands the Neoteric to devise a defense, which they do, but with unexpected results for Kidder.

This story is a metaphor about choosing the safe vs. the risky path in life, and having regrets for choosing the former. The protagonist meets an old man who claims to have developed the ability to travel in time through sheer willpower. The old time traveler offers to teach the protagonist this skill, but the protagonist is afraid and refuses. When the old time traveler dies, he regrets having refused, and that the secret of time travel has become lost forever. But then he discovers that the time traveler left him written instructions on the time travel process. Again, he is afraid, and locks the manuscript in a vault, waiting for the day when he is brave enough to "say farewell to order and routine, and to send myself soaring into that great uncharted infinite gulf of time."